What Can Businesses Learn From Mr Beast?

With over 100 million YouTube subscribers, Mr Beast is an ongoing success. But, what can businesses and marketers learn from this YouTube sensation?

If you’re Gen Z or a Millennial, then you will know who Mr. Beast is. Although for those living under a rock, Mr. Beast, is the world's most successful Youtuber, famous for his high-quality videos and evergreen content. With his main channel having 106 million subscribers, his content costs a reported $1 million to produce, with his famous “Squid Games” video costing around $3.5 million. Although being on YouTube since 2012, his content started to take off around 2017, when he began to carry out stunts and challenges.

So, what can marketers learn from Mr. Beast’s ongoing success?

Every Marketer should have a strong understanding of their audience and establish their needs and wants. Mr. Beast knows his target audience like the back of his hand. His target audience is likely to be under 25-year-olds. He thoroughly understands what excites his audience and is an expert at maximising trends. A great example of this is his “Squid Games” video, where at the height of the popularity of the Netflix show, he re-created the series offering the winner $456,000. This piece of content racked up more than 225 million views.

Success doesn’t rest and that shows with Mr. Beast. Although he was already highly successful, Mr. Beast carried out research in 2021 to realise that an amount of his audience wasn’t native English speakers. As a result, he set up YouTube channels in English, Spanish, French, Portuguese, and Russian and began dubbing his videos to suit the channel. His research also led to him localising content due to knowing what video’s where successful in each country. 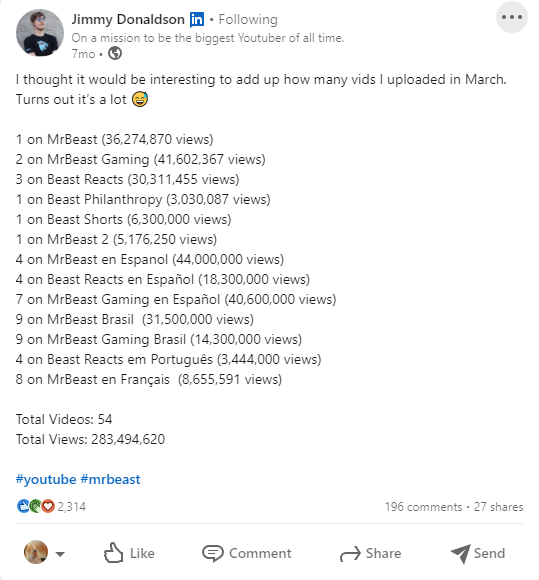 Mr. Beast would carefully select the videos he thought would do well in each market and dub them accordingly. This was a first for a YouTuber and had massive success.

Through conducting audience research, he was able to set up his own “Philanthropy” page. This started with giving strangers $1000. Mr. Beast saw how well these videos were received and started going bigger and bigger in Mr. Beast's style.

Everyone has heard the phrase “need to spend money to make money” and that is exactly Mr. Beast’s business model. He’s known for creating and carrying out crazy stunts and challenges resulting in big prizes like giving away a Lamborghini or a “20 million” private island. You might be gobsmacked with these prizes, but he understands his monetary investment will drive performance. The big prizes help grow his brand and expand his viewership. Although most businesses wouldn’t even entertain this idea, Mr. Beast knows that these “events” lure people into his brand and then monetises through his channel and “merchandise”.

To stand out from a crowd, creativity is vital. Every marketer knows this. The video content Mr. Beast chooses to create resonates with his target audience, whilst being extremely creative to stand out from other YouTubers. He recreated “Willy Wonka and the Chocolate Factory” to help launch his new chocolate business, Feastables. The video had a running chocolate waterfall, and a chocolate toilet and featured the “Feastable” product throughout.

Use the Powers of Influencers

Research carried out by Content Marketing Institute indicates that marketing campaigns that use social media influencers show a 10x increase in conversion rates. Although an influencer himself, Mr. Beast taps into his relationships with other influencers to feature them in his videos and competitions. Doing this helps appeal to his audience and entices them into watching his videos.

Under-25-year-olds are changing the way we market. They want to feel a stronger connection to the brands and creators they support. Gen Z considers a brand/ creator’s morals before choosing to engage with them. Mr. Beast has perfectly managed to infuse his work with a CSR and a purpose, combining his astounding video ideas with a charitable spirit. He launched the Mr. Beast philanthropy channel, which gives 100% of its revenue to food donations across North Carolina.

He's also launched campaigns to plant 20 million trees and remove 30 million pounds of trash from the sea. He encourages his audience to donate to charities as well.

Looking from the outside in, Mr. Beast is an incredible marketer who understands every aspect of his audience. He uses his authenticity, creativity, budget, and philanthropy to connect and engage with his audience creating a loyal audience. Mr. Beast uses his multi-channel function to meet his growing audience's needs. Marketers should use Mr. Beast as an inspiration for their marketing campaigns.

Will you take some inspiration from Mr. Beast?

The Zen Agency are specialists in all things digital, whether it be website and app development or digital design. We can help with creating digital marketing strategy, content creation, social media marketing, PPC, SEO and videography.

Are you looking for advice on all things digital marketing? Call us today at 0141 229 1333 or fill out our quick enquiry form on our website and a member of the team will be in touch to discuss your marketing needs.

How Does Googles Algorithm Work

Our team of SEO specialists have created a guide to help businesses understand how Google's algorithm in order to boost your search rankings!

Are Sitemaps important for SEO in 2023?

Do you have a website? Do you regularly use sitemaps? Ever wondered how beneficial it is for your SEO? Find out more here!

The Importance of Storytelling in Christmas Advertising in 2022

With John Lewis and Aldi releasing their new Christmas adverts capturing the holiday spirit, how effective is storytelling marketing in Christmas campaigns


Show more
We use cookies to personalise content and ads, to provide social media features and to analyse our traffic.
Learn more